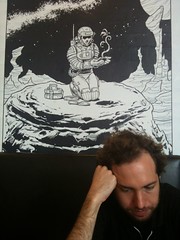 The spouse at the burger joint Grill’d in Brisbane City. They do good burgers. 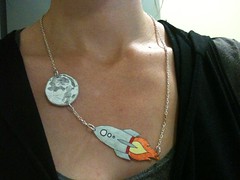 The awesome Rocket to the Moon necklace by Rare Indeed given to me by my good friend Lucy. It should go nicely with my Black Milk purple galaxy leggings and my Black Milk Moonwalker swimsuit (not to mention my Atlantis jacket). 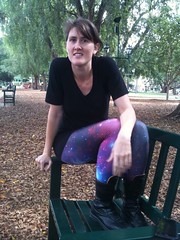 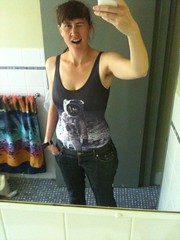 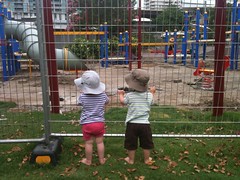 I often meet up with friends with kids and sometimes we go to South Bank. One day the playground was closed off for refurbishment. I love this pic of my kid on the left and my friend’s kid on the right, watching the playground (and workmen) through the fence.

The last time I posted I was still enrolled in Honours for my Arts degree. In the first half of 2011 I completed all the coursework. After the semester was over, I think I was quite burnt out from full-time study, and care of a toddler. I was then supposed to write a 15,000-word thesis but after the third month passed where I had written nothing, I decided that it just wasn’t happening now and maybe it was time to withdraw. I still feel disappointed about it but really hope that one day (soon?) I will return to it.

During the illness over winter, and the busyness of full-time study my running fell by the wayside and I tried to get back into it but then when I fell pregnant the morning sickness was so bad that I didn’t run or exercise for a good three months. Unlike my first pregnancy it has actually waned somewhat so I’ve been exercising again (walking not running) so I’m hoping to keep this up for the rest of the pregnancy – I’m due the end of June. My fitness goals for this year are to keep up with walking (and maybe yoga and weights) until the baby is born in June and I’m hoping to have started running again by the end of the year. I started running when my first baby was five months old so I’m hoping to be able to do that again but I’ll just have to wait and see how things go.

Paul returned to work this week after three weeks off. Over that time we had a great time hanging out as a family – spending time with Paul’s family, going swimming, going to the beach, going to art galleries. I’ll try and post some photos from that stuff soon.

This entry was posted on Tuesday, January 17th, 2012 at 9:44 am and is filed under Uncategorized. You can follow any responses to this entry through the RSS 2.0 feed. You can leave a response, or trackback from your own site.